A campaign to save the library was launched by residen

ts of Whitburn with a petition being submitted to the council with 1249 signatures calling for the council to stop the closure of Whitburn Library.  We had overwhelming support from the community.  As well as this, we had support from Simon Grundy (from SunFM).  We also had some support from the Whitburn Neighbourhood Forum and Whitburn Residents Association.  Several authors also gave words of support and contacts with other community libraries. Authors included Hamish McBain and best selling author Sheila Quigley.  Childrens author/illustrators Ciara Flood and Layn Marlow were also very helpful and supportive in the early days.

We received a hand written letter from Julia Donaldson CBE, the 2011–2013 Children’s Laureate most famous for her childrens story ‘the Gruffalo’.  She stated  “I agree with you that although “hubs” can be great, they should not replace smaller local libraries and that a community-run service is not a satisfactory alternative to an authority funded one”. She has also said that “Even if cash-strapped authorities do recommend volunteers taking over libraries this should be temporary, with a view to taking the library back should more funds become available”.

Amy Hest’s childrens book ‘You can 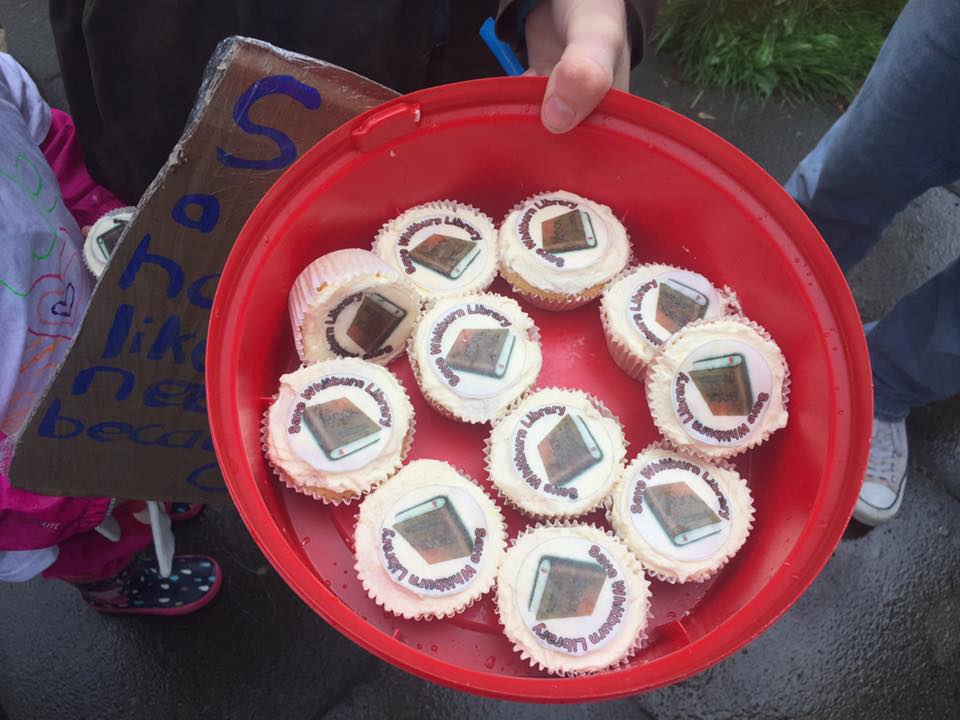 do it, Sam’ was inspiration to make some cakes and deliver them to local councillors in South Tyneside with a m

essage to ‘Save Whitburn Library’ at a local Community Area Forum meeting.  The words of support from Amy Hest:  “Your message about books and libraries took my breath away. You’re making a difference, and I’m thrilled and honoured that you are using Sam’s cakes as a tasty little “hello, please listen… we NEED our library!” I do hope the powers that be are listening. Makes me so sad. I was practically raised in our town library. My mom was a powerful reader and some of my earliest memories are of the two of us going to the library. If I close my eyes, the scene pops! (So thank you for that).”

It soon became apparent that the library was unlikely to close, however would be taken over by another organisation, who’s primary interest was not the local community or the library.  In order to ensure the continued, comprehensive library service to be operated from Whitburn Library, the only op 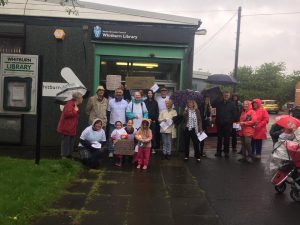 tion was to put a strong expression of interest in to the council for the community to run the library ourselves. In order to achieve this, local resident Rory Thomson set up a charity with 9 trustees, all of whom live in Whitburn and were passionate about the future of the library. We were one of two expressions of interest received for Whitburn Library and we have no doubt that our charitable status, desire to continue to offer a complete and comprehensive library service along with promoting the heritage of the village of Whitburn is the reason why we were chosen as the preferred option for the future of Whitburn Library. We strongly believe that the library services and activities offered at Whitburn Library would have suffered had any other organisation been offered the library.

The charity ‘Friends of Whitburn Library’ established in August 2017. It has been a lot of hard work and dedication to establish a viable proposal to put forward to South Tyneside Council and convince them this was the right thing for the future of the library and the village. By the end of 2017 it was confirmed that we were the preferred option for the future of Whitburn Library… subject to negotiations.

We have liaised with building surveyors, solicitors and the council to ascertain exactly what running the library will entail and trying to ensure that we can sustainably achieve this in the short, medium and longer term.

Click the link below to read our charity constitution

We have many ideas as to how to maintain the library service, while generating the income required to ensure this is a sustainable venture for many years to come. If you wish to help us please get in touch using the contact details section of the website.